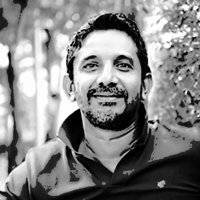 After experiencing both the Pakistani film and television industries, Imtisal settled into a long cohabitation with the temperamental world of advertising. Where he fast gained a reputation for making the impossible happen. He also set up and mentored the team of what is now the largest digital advertising consultancy of Pakistan, and co-authored the one of the highest grossing Pakistani films– Ho Mann Jahan.

He is adept at creating and managing high performance teams to deliver business building advertising communication across diverse regions; from Africa to China. He has not given any TED talks before.